In December 2008, HMS completes sixty years since its foundation in Calcutta in the newly independent India in 1948. Of course for the labour movement, six decades are not too long a way and in that sense we have miles to go still. However, it is a matter of accomplishment for a national trade union center to have survived and grown without being a part of the political parties in a country like India where virtually every other central trade union organization is part of some political party or the other. From about 6 lakhs membership in 1948 to over 55 lakhs and still growing, is no mean achievement.As we move ahead, we need to stop and think - how do we build upon what we have? How do we face the challenges of the 21st century?

Most importantly, to assess how far the organisation has been able to follow up on its goals and the ideals for which it was established. 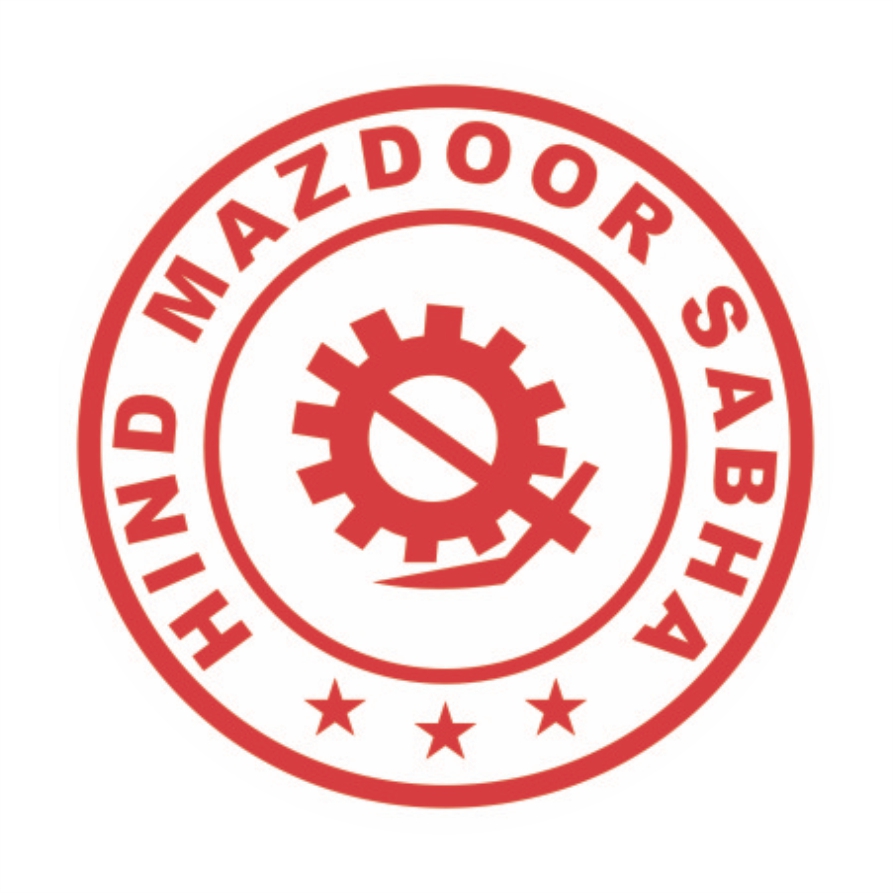 The Birth of HMS

It may be remembered that in 1947-48, apart from M. N. Roy inspired independent Indian Federation of Labour (IFL), there were 2 main central trade unions - the All India Trade Union Congress (AITUC) which was under the control of the Communist Party of India and the newly formed Indian National Trade Union Congress (INTUC) which was set up at the behest of Congress nationalists and the Gandhians of Hindustan Mazdoor Sewak Sangh in the Indian National Congress, the ruling Party. The Socialists in the Congress who broke away from Congress party in 1948, formed Hind Mazdoor Panchayat (HMP).

This was a period of much turmoil as well as many hopes for the future of free India. This post 2nd World War period in India was marked by acute shortages, rising prices and spiraling unemployment. There was much turbulence in the industrial relations scene as workers were facing many hardships. As many as 16 million mandays were lost due to strikes in 1947 as discontent among the workers grew. The response of the two major central trade unions -AITUC and INTUC- was not acceptable to the socialists at that time. Mere militancy dictated by the needs of the communist party (as reflected by AITUC at that time) or sub-servience to the government (as reflected by INTUC) was not meeting the needs of the workers. The socialists felt that the trade union movement could not be tied down to the needs of the political parties but must follow policies only in the interests of the Indian workers. This necessitated both cooperation with the development efforts of the country as also constructive opposition to the anti-labour, anti-employment policies of the government and the employers. This thinking led to the formation of Hind Mazdoor Sabha (HMS).

HMS was founded in Calcutta during the trade union conference from 24th to 26th December 1948. The conference was attended by the representatives of Indian Federation of Labour (IFL, founded in 1941), Hind Mazdoor Panchayat (HMP, founded in mid 1948), unions from the Forward Block (Party set up by Sh. Subhash Chandra Bose) and leading independent trade unions at that time. Over 600 trade union leaders participated, representing 427 unions and a membership of over 600000 workers. There were leaders like Jay Prakash Narayan, Sibnath Banerjee, R.A. Khedgikar and Ms. Maniben Kara who represented the railway unions; Shri Dalvi and Sh Ramanujam attended on behalf of Post & Telegraph employees; Miners were represented by Basawan Singh and P.B. Sinha while Textile workers were represented by R.S. Ruikar, Anthony Pillai and P.S. Chinnadurai. There were also representatives of Government employees, Teachers, Commercial employees, Port & Docks, Printing & Paper, Tobacco, Plantations and Sugar. Although HMS as an organisation was new, the men and women who founded it were veterans of the Indian trade union movement, most of who had been instrumental in the formation and growth of AITUC earlier. The Founding Conference elected Com. R.S. Ruikar as the first President, Com. Ashok Mehta as the General Secretary and Com. G.G. Mehta and V.S. Mathur as Secretaries. Ms. Maniben Kara and Com. T.S. Ramanujam were elected as Vice-Presidents of HMS and Com. R.A. Khedgikar as the Treasurer. The members of the Working Committee included veteran leaders like - Jayaprakash Narayan, V.G. Dalvi, Ms. Aruna Asaf Ali, V.B. Karnik, Dinkar Desai, N.V. Phadke, M.V. Donde, Rajani Mukherjee, Haren Ghosh, Anthoni Pillai, P.S. Chinnadurai, Peter Alwares, A.M. Williams, Munshi Ahmed Din, Vinayak Kulkarni, Nibran Ch. Bora and Basawan Singh.

The formation of HMS represented the emergence of a new force in Indian trade union movement - that of unionists who believed in free, independent and democratic trade unionism. It represented independence of trade unions from the control of Government, Employers and Political Parties. It also represented a new thinking that role of trade unions is not only to oppose anti-labour policies of the government and employers but also to play a positive role in the development of industry to share gains from growth and of preparing & training workers to discharge their responsibilities as citizens (see HMS Manifesto for details).

Hind Mazdoor Sabha (HMS) has its origin as a historical imperative. In the wake of India's independence after nearly two centuries of foreign subjugation, the few national trade unions centres were functioning as the labour wings of different political parties that gave rise to the growing realisatition among the workers of the imperative need for the country's working class movement to be free from the misuse by the political parties for getting their narrow party ends served. It was this realisation that made the 600 delegates participating in the founding conference on December 24, 25 and 26, 1948, with the mandate of over 600,000 workers organised under 427 trade unions, to take the historic decision to form an independent and democratic labour organisation under the banner of Hind Mazdoor Sabha.

Since then HMS has been functioning as an independent and democratic trade union centre free from the pulls and pressure of the political parties, employers and the government. HMS, however, is not to be construed as being apolitical. It stands for industrial democracy, workers' education, cooperative movement and for building the trade union movement as an effective instrument of the country's socio-economic transformation with social justice. The national centre is inalienably committed to the values of democracy as it believes that the economic gains at the cost of liberty and democracy are in the long run counter-productive. At the same time, the survival of democracy is dependent on the betterment of the working and living conditions of the millions of economically active people who are the real producers of the nations wealth. HMS is against the concept of a market-driven economy and privatisation as the panacea for all the ills of human resource surplus developing economy like India with acute economic and social disparities and formidable poverty and unemployment. The free market is solely profit oriented and has no social concerns. For a country's balanced development with equity, the State should play a regulatory role.

HMS is non-sectarian in its policies and programmes. It is not merely demand and conflict oriented. The all round development of the workers and their families is its constant endeavour and towards this end, HMS encourages and assists its affiliates to take up various non-traditional activities, such as elimination of child labour, gender awareness, environmental protection, combating HIV/AIDS, adult literacy and campaign against social evils. HMS is of the firm view that all these objectives could be meaningfully achieved by a single, strong and united trade union movement and is constantly in pursuit of this goal. 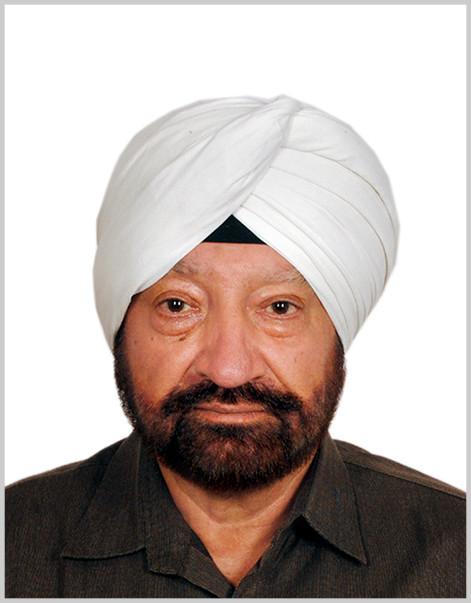 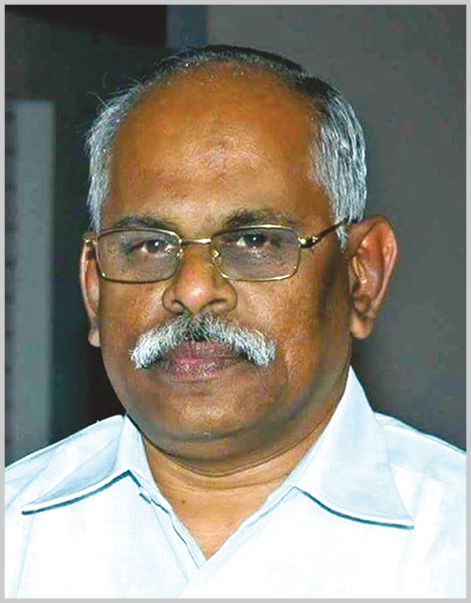 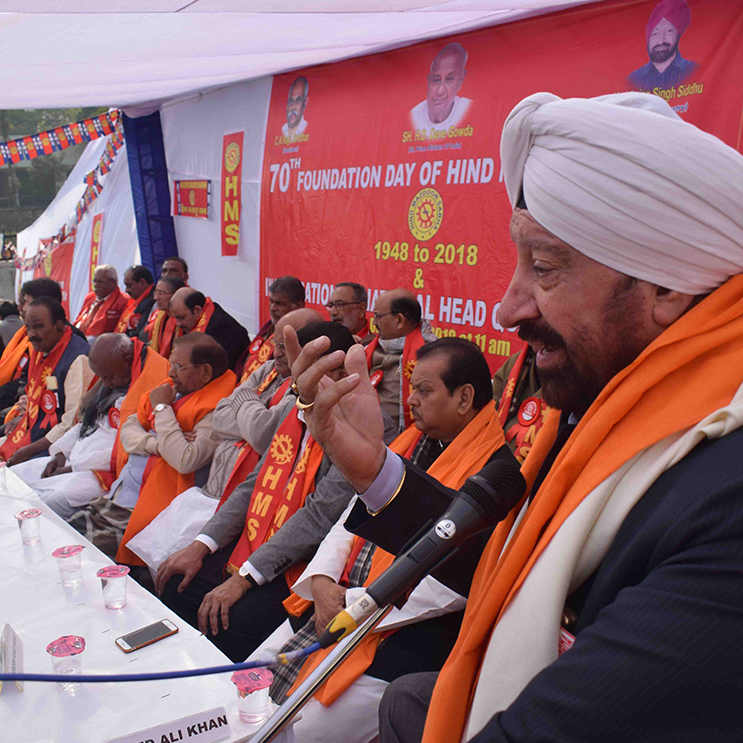 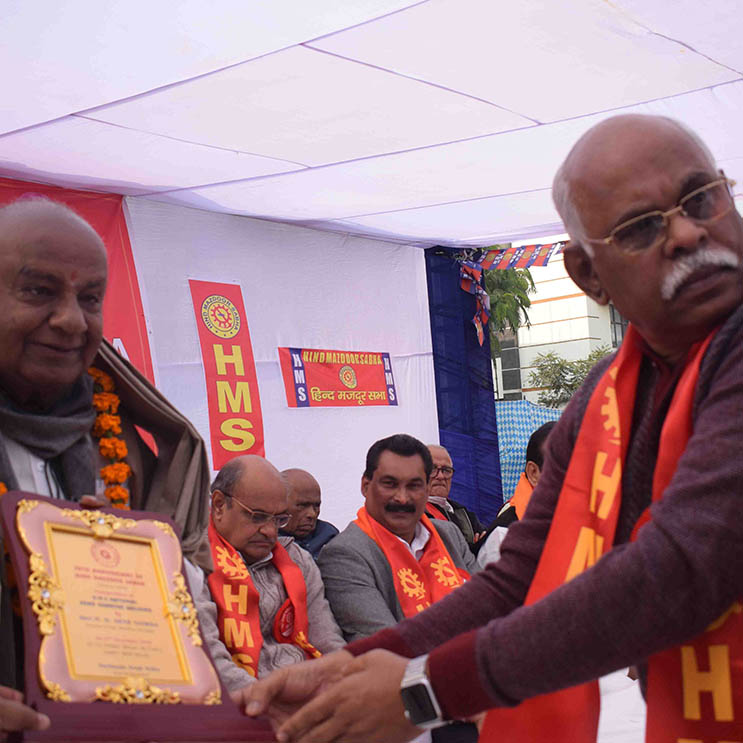 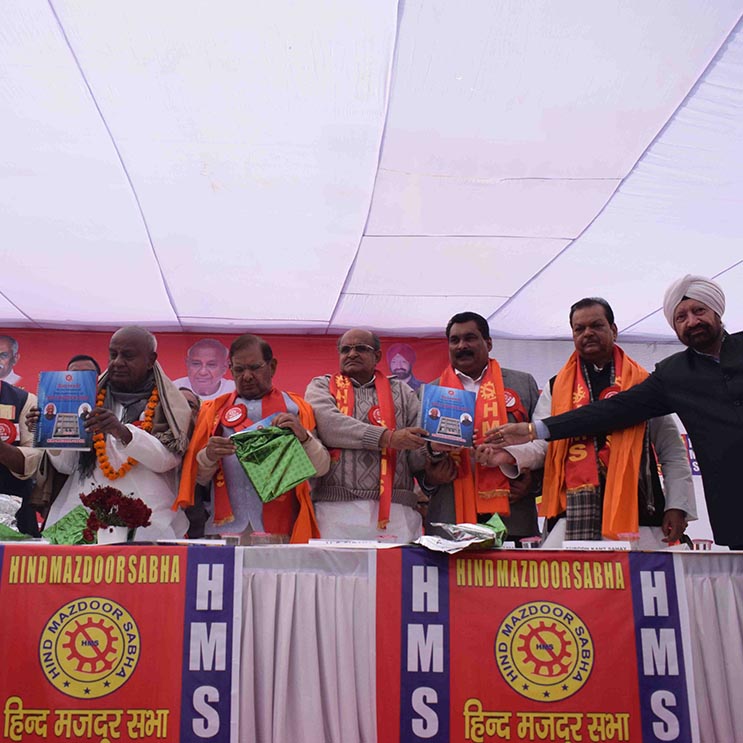 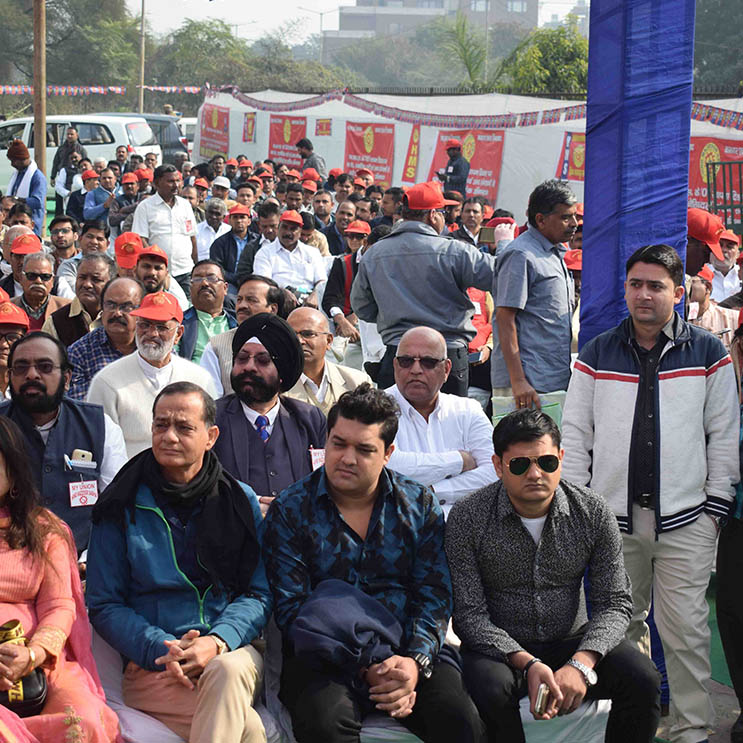 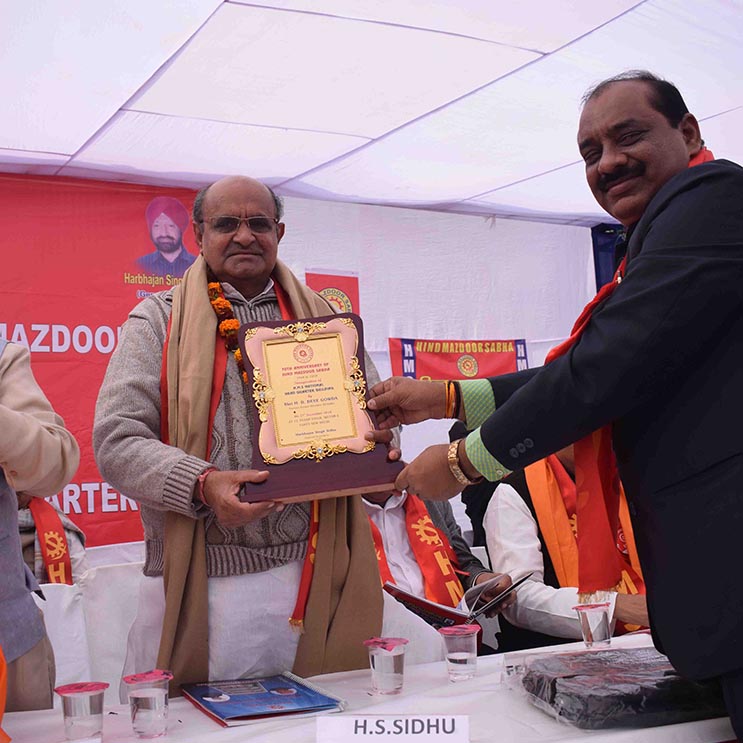 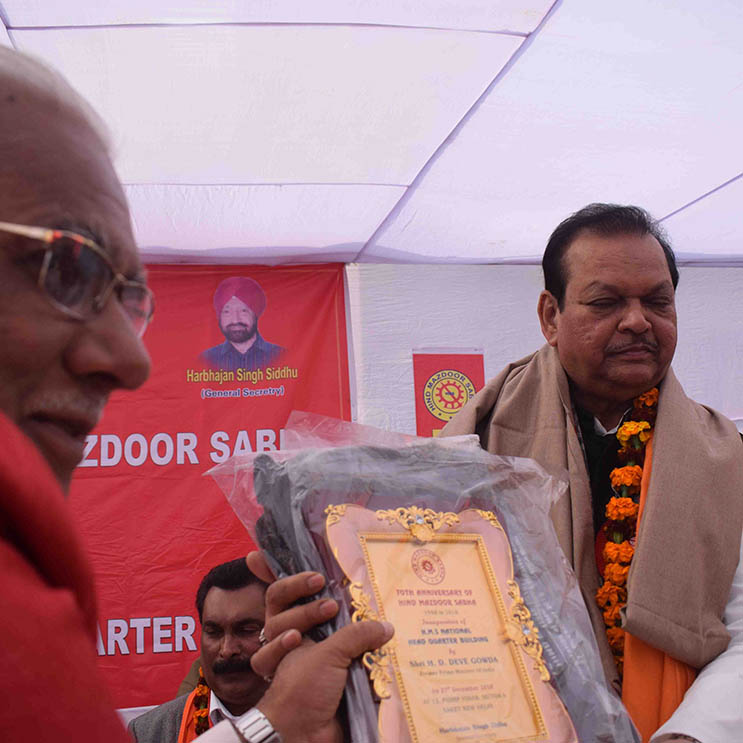 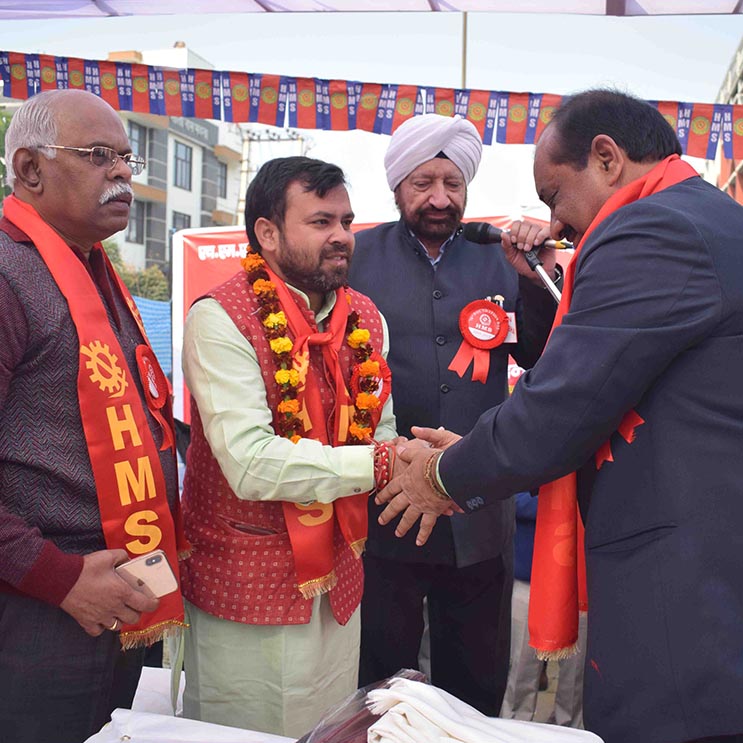 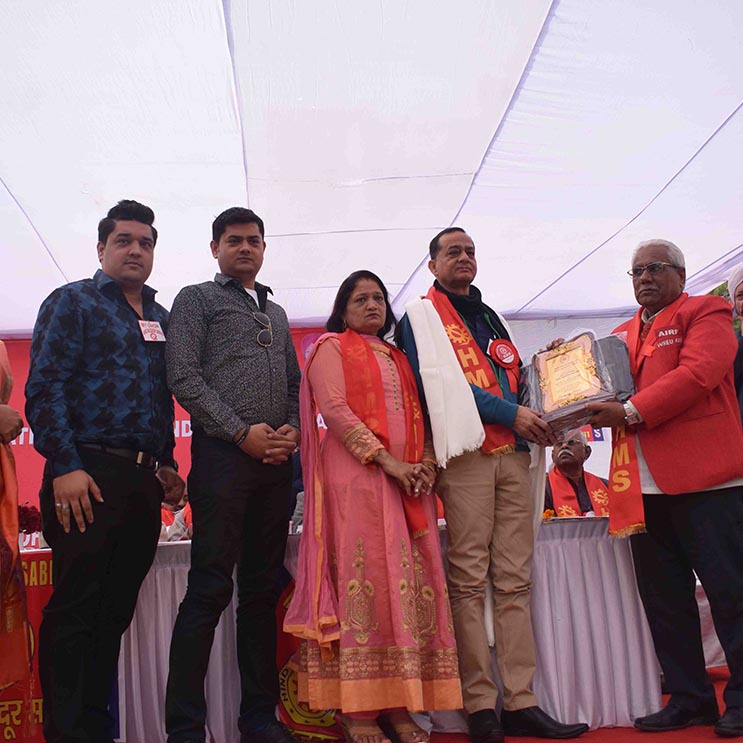 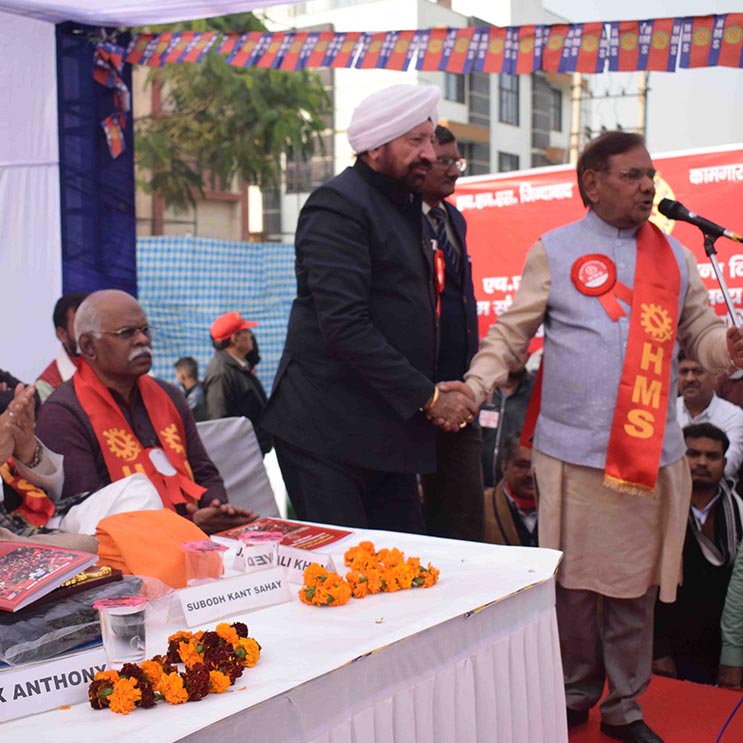